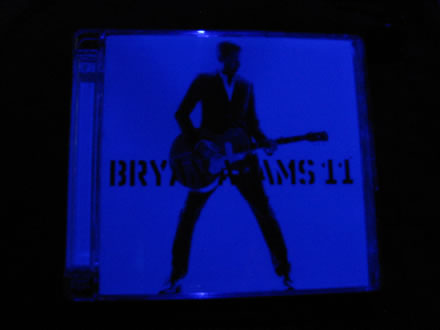 Photo of my 11 cd – Taken while playing around waiting for the show. I wanted to see if I could take a handheld with only blacklight…

I’ve moved the photos into a gallery on the botom, click on them for larger versions. Do not use or post these photos elsewhere. Due to the large number of photos that are preloaded, this page might take a while to load… Connie

Last week I actually managed to win tickets to see Bryan Adams at Toad’s Place in New Haven, CT from bryanadams.com. The only way to get into this particular show was to win tickets from 96.5 or the fan club… The fan club was giving away 5 pairs of tickets to each of the acoustic promotional shows Bryan is doing for the release of “11” luckily I got one of the 5. Kind of amazing as I typically don’t win much of anything…

The show was last night, Monday May 5th at Toad’s Place in New Haven. There was some confusion as to the time he was to start. His site said 8pm and Toad’s site said 9pm. He ended up starting sometime after 9:30 and playing for about a hour and a half.

This is the second show I’ve seen at Toad’s Place… the other being Jules back in 99. The place hasn’t changed any nor has the crowd… college area (Yale) bar/club with people at the bar more interested in chatting than listening to a show… pity as it sucks for the performer. I know Jules ranted about it after the show – can image Bryan did the same…

Other big difference – I didn’t have a pass to bring my SLR so the photos I took were all taken with my little canon sd800 (no flash – don’t want to blind the guy, set on the manual setting with ISO800). Challenging lighting but I have quite a few keepers even with the point-and-shoot… and I didn’t have to wait for things to get developed as I was shooting film back in 99! Aah technology 🙂

On to the show…

Bryan broke a string on his guitar during the first song, “Tonight We Have the Stars.” He quickly switched out guitars and picked up right where he had left off after the 2nd verse… It was great hearing a song from the new album right at the beginning! He mentioned later that he couldn’t recall ever breaking a string on the first song before… Probably not a good omen…

After a couple (or was it 3) songs, Bryan mentioned the idea of these small acoustic shows was to give people a chance to hear some song off of the new ‘upcoming’ (for America it comes out on May 13th it has been out since March in Europe) album and a taste of how the songs are created with just the acoustic guitar. Small intimate like sitting in his livingroom. He also mentioned that he at first thought he had played at Toad’s before but that on arriving he was was certain he never had and wrinkled up his nose, sniffed around and mentioned he would have remembered it if he had… Typical college town bar…

One of the many… ‘what were they thinking?’ bits on the venue was the sports tv being on above the bar… Bryan mentioned he that he didn’t think he’s ever played in a place where sports tv was playing over the bar while he played the gig… I don’t think anyone should have to and the club did turn it off shortly after Bryan’s comment… he later insisted he didn’t mind… but anyway… no more grips about the venue…

I loved watching Bryan’s musicianship. It was just him and his acoustic guitar and occasional harmonica for the most part… so the focus was really on him not. At most concerts I find myself watching the various band members as well as the dynamics between them. Here everything was bryan. I really enjoyed watching his hands on the frets and the look of enjoyment he had jamming along on the guitar. I would have loved to have gotten some closeup on his hands and face, unfortunately I couldn’t shoot stuff like that with the givens so stuck with doable shots, wider angles to let more light in… It was hard with the harsh, at times odd colored, stagelighting. I end up with some interesting lens flare on several of the shots. Perhaps I should try becoming a professional venue photographer or something so I could bring my SLR to these things 🙂 Now that might be fun!!

The fans up against the stage were great. I met up with Karen and Ang who Jon and I had met at the Boston show last August. (Jon was quite upset he couldn’t come to this show as it was a 21 and up.) Everyone was singing along to all of the songs, old and new…. It was obvious when Bryan pulled out a ‘hit’ from days gone by that he pulled more of the crowd into the show… “Summer of 69” rocked! But then it was followed by “Walk On By” a slow balad from 11… which lost interest for those at the bar… Sad as it is a beautiful song.

Other fun tidbits… Before playing Lonely Nights he mentioned he was going to play an song from way back… He said despite his youthful appearance that he is an old fart. Truthfully, he is looking quite good for 48… he has aged well… I honestly think he looks better now than he did in the 80s… Still a cute moment in the show… Another cute tidbit was during “I Think About You” he sang “I think about you… and my guitar…” during one bit…

Towards the end of the show Bryan had his drummer Mickey Curry who lives in CT join him on stage. It was great! Mickey mentioned that he was using the first drum kit he ever played given to him by his dad when he was little. I could image a little Mickey about Jon’s size sitting at them going away… Very swet.

Bryan and Mickey did “The Only Thing That Looks Good On Me Is You” and “Run to You” both of which really rocked with the drums added in – at the beginning of “Run to You” Mickey asked Bryan what they were going to play and Bryan turned to him and said “I’ll show you!” and started Run To You… They popped off stage breifly after “Run To You” and then came back and did a Beatles cover of “I’m Looking Through You” – quite fun… a little deja vue-ish…

Mickey then left the stage and Bryan started “Fits Ya Good” – he called Mickey back up during it and so he joined in about halfway.

I had brought my 11 cd to the show hoping I could get Bryan to sign it. I know he saw it on the stage in front of me but he didn’t stop to sign anything after the show.. I’m sure he was a bit down with the venue… which I can understand. Mickey came up afterwards and started packing up his drums. Some fans asked for sticks and he passed some out – I was contemplating going up and asking him to sign the 11 booklet and then he asked for a sharpe – so I let Mickey borrow mine and then after he was done asked him to sign my booklet – he said “sure and thank you for letting me use the sharpe” He was very soft spoken, sweet guy.

All photos are copyright Connie J Burianek. Do not post or use without explicit permission.