I originally created my wordpress theme back in 2007.. before widgets and nifty menus etc… hence it was frustrating having to code in widgets I was interested in by hand so nothing got added or updated.

This week I’ve spent time updating some of my own sites. Back in April I got a SmugMug account which I wanted to style a bit. I finished that on Monday and then decided it was time to tackle my WordPress site. I knew I wanted to keep the basic look I’ve had but wanted to bring it into the WP3.0 relm with support for Menus and Widgets.

I just put it live this afternoon… there is still more I want to do with it. Specifically I want to code a slide out sidebar for on the single posts pages and check out some of the SmugMug/Wordpress plugins. But this will do for now – I think it is much better than I had before.. 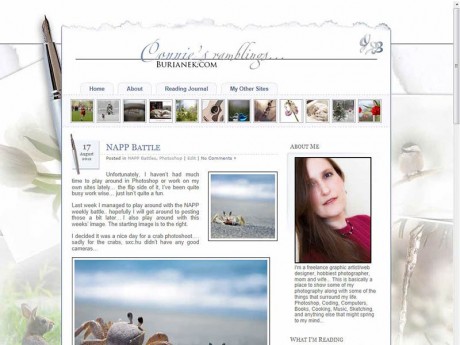 One Response to “Long needed update to my WordPress theme…”