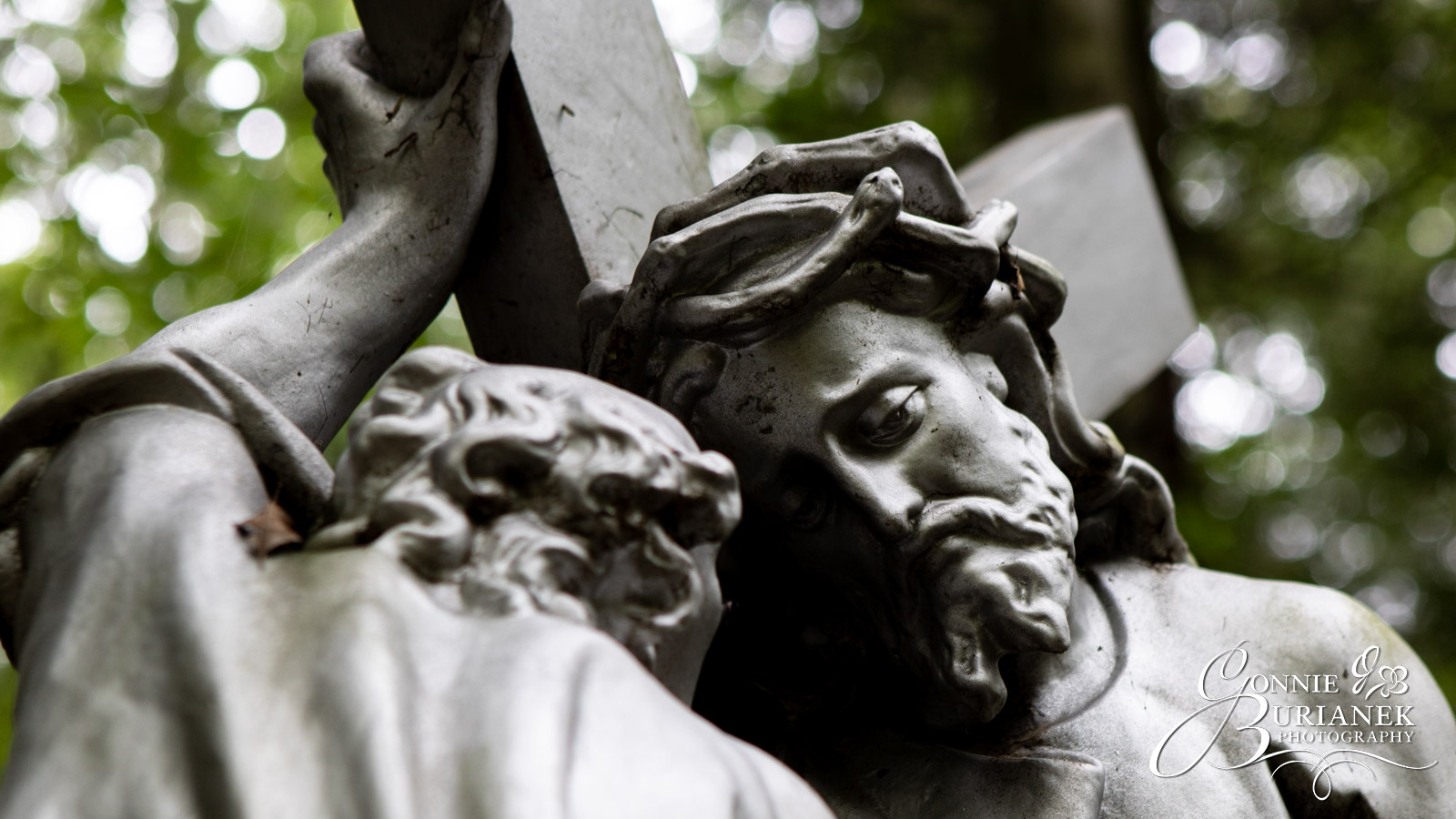 Here on the roadside leading out of Jericho is a man noticeably from the first set… a man considered poor in spirit, mourning in his blindness but eager with a hunger to see. His faith (the spirit is actually strong within him) urges him to call out even though as a blind man, he is considered a nothing… an individual of no worth… by humanity. Many of the people around him mock him. Rebuke him. Tell him to be silent. Even though they are crowded about the Lord, they have no concept of what Jesus REALLY stands for. They are simply eager for the show, the chance of seeing a miracle… of getting a glimpse of this Man who is so very unlike all other men. In telling the beggar to be silent, in rebuking him, they show they are not merciful… They are not pure in heart… They have no love of their neighbor… the blind beggar.

The blind man was not blind in punishment… he was blind because both sides of the Beatitudes must be represented… he was blind and weak for God hoped his blindness would encourage compassions from those in a position to show mercy… That said, he was very strong in FAITH. This is not just shown within the Bible in the parables of Christ. Think of the story “The Beauty and the Beast” … the enchantress came to the Prince as a hag… he showed no mercy… no compassion… she turned his external image into that of his Heart. It is important that those given weaknesses find within themselves a means of loving that which they do not wish to embrace or to be seen because if it is… those in the world would mock and rebuke them… It is important to find the strength… the beauty… that is hiding behind the weakness. Just as it is important to realize that behind those who appear to be strong… there is a hidden weakness… Things are not as they appear for only God knows the heart within…

Many things happen that God does not will. But he still permits them, in his wisdom, and they remain a stumbling block or scandal to our minds. God asks us to do all we can to eliminate evil. But despite our efforts, there is always a whole set of circumstances which we can do nothing about, which are not necessarily willed by God but nevertheless are permitted by him, and which God invites us to consent to trustingly and peacefully, even if they make us suffer and cause us problems. We are not being asked to consent to evil, but to consent to the mysterious wisdom of God who permits evil. Our consent is not a compromise with evil but the expression of our trust that God is stronger than evil. This is a form of obedience that is painful but very fruitful.

— Fr. Jacques Philippe, In the School of the Holy Spirit

Compared to the infinite goodness of God, all the goodness of the creatures of the world can be called wickedness. Nothing is good save God only [Lk. 18:19]. Those who set their hearts on the good things of the world become extremely wicked in the sight of God. Since wickedness does not comprehend goodness, such persons will be incapable of union with God, who is supreme goodness.

All the world’s wisdom and human ability compared to the infinite wisdom of God is pure and utter ignorance, as St. Paul writes to the Corinthians: The wisdom of this world is foolishness in God’s sight [1 Cor. 3:19].

Those, therefore, who value their knowledge and ability as a means of reaching union with the wisdom of God are highly ignorant in God’s sight and will be left behind, far away from this wisdom. Ignorance does not grasp what wisdom is. St. Paul says that such wisdom is foolishness to God, for in God’s sight those who think they have some wisdom are very ignorant. The Apostle says of them in writing to the Romans: Taking themselves for wise, they became fools [Rom. 1: 22].

Only those who set aside their own knowledge and walk in God’s service like unlearned children receive wisdom from God. This is the wisdom about which St. Paul taught the Corinthians: If anyone among you thinks he is wise, let him become ignorant so as to be wise. For the wisdom of this world is foolishness with God [1 Cor. 3: 18-19]. Accordingly, to reach union with the wisdom of God a person must advance by unknowing rather than by knowing.

The crowds that gathered around Christ, the ones who mocked and rebuked the blind man, they are the fools. They think they know… but their hearts are closed to knowing. Christ is not there for them. Nor were they present for Christ when he walked the road to Calvary.

Yes, Christ walked among many crowds… people hungry for what their hearts unconsciously sensed he possess… but their hearts were closed. They thought they could be saved by association… by walking along the way with Christ. But Christ spoke in riddles, parables which the vast majority could not understand… then or now. While their eyes see him physically, their souls are blind. While their ears hear the words his speaks, they can not understand for the Spirit of God is not within them to translate. The blind man whose eyes let in no light is able to see with his soul the grandeur of Christ. He knows Christ can heal him and calls out in faith knowing that while the crowd will rebuke him, that Christ Himself is merciful and loving to those who seek him with a pure heart.

Faith in Christ heals the blind man and he immediately follows Christ on his way.

As Christians we are called to follow Christ on his way not just in external action but in HEART. Each of us is called to accept the blessings from both sets mentioned in the beatitudes. We are called to accept our weakness… the areas in our lives in which we are poor in spirit… aspects we mourn… the aspects we long to hide from others. We are called to hunger and thirst for Jesus Christ. For only in Him and with Him are our souls ever satisfied. We are called to graciously give of our strengths and riches to others… to show mercy… to have purity of heart which abides by the higher moral consciousness that ALL humanity is created by God and as such has EQUAL dignity with God. God does not see us in terms of earthly position, status, or worldly wealth… God ONLY sees our HEARTS. We are called to be meek and humble knowing we are nothing of ourselves. We have no honor of our own doing. Calling oneself a “Christian” means nothing if one’s Heart is not pure and loving. As the letter to the Hebrews states: “One does not take the honor upon himself, but he is called by God.” That which we take upon ourselves means nothing… it is only in emptying oneself and opening to receive the true wisdom which can only come from God himself that we obtain anything of true value capable of satisfying our hungry hearts…

Based on the scandal within the Church right now, one has to wonder how many Priests TRULY have been called by God…. How many enter the Priesthood not based on a calling from God Himself but because they are seeking honor and a place of glory or importance upon and for themselves?

Priest are called to go out and gather the children of God from the ends of the world… the strong and able as well as the blind and the lame… the rich as well as the poor… not for their own glory and appetites but for the Glory of God. They are to love those who cry out to them with purity within their hearts because Christ was divine purity of heart and loves those who find and use the strengths they have for good while crying out to Him in faith to provide for their weaknesses…

While I have only posted a few reflections on my blog, I have been writing them for well over a year. I had written them before while in college and going through RCIA… but these have been different. Over the past 23 years so many people have entered my life who hunger and thirst for something more than what their life has… I know religion, in the form it has taken on in today’s world, turns many people away as more often than not, it is used to divide and segregate people. Often, the Religious are the crowds believing they are hovering around Christ and yet mock and rebuke those who don’t fit into their sense of ‘perfection’. These are people who do not actually know Christ. They are the fools St John of the Cross writes about… those who do not and can NEVER obtain unity with God.

Christ did not follow the popular crowd. He was never concern with who he was seen with… He loved and spent much time with those who society banished… for those were the ones who were ready to see and hear. While many followed Him… Christ Himself walked His own path. He did not go into the Synagogue hoping to be given a place of ‘glory.’ He did not lavish attention on those with titles displaying strengths and riches. Instead he focused on people like the poor blind man who could not help but display weakness. Those who are rich in the ways of this world are often very poor in the ways of Christ. They might try to proclaim they are Christians, but their souls are blind… they cannot see the sheer beauty in Christ’s humble and merciful humanity. His humble birth in a stable. His humble death on a cross. The spirit within them only allows them to hear what they want to hear…. They are deaf to Truth. They are deaf to Christ himself. When this is the case with Priests, the blind is leading the blind… without knowing and offering sacrifice for their weaknesses but instead glorifying in themselves, we end up with the very issues plaguing the Church today. Priests who think they are redeemed and of God simply because of their position and title… Priests who have entered the Priesthood not on God’s calling but in seeking their own honor and glory. The Church needs to remind its Priests that if they are truly called to serve Christ they must serve with meekness, humility and Purity of Heart.