It has been a while since I’ve posted… life has been… interesting… we came home from vacation to find problems with our water well. Three weeks later and a new well pump, things seem to be working again finally.

Next step was to actually do our ‘Summer Project’ of refinishing the deck. So we pressure washed it, scrapped it, cleaned it up, painted it and it rained… and rained… so we had to sand that off and repainted today. Hopefully it will dry and be done now!

I’m several battles behind so yesterday I wanted to try to figure out a way to bring Battles 126-130 altogether… and they had so much in common! NOT….. 126 (ruins) 127 (surfboard beach shot) 128 (pin cushion) were all quite easily added… Had a bit more problems with 129 – the metal piece… so I inverted, converted to polar coordinates and then use the distort twirl to it and it became wall art… This week’s image (130 – the old paper) was set to multiply over the images in the tv screen itself.

Here are the originals.

And here is the composite. 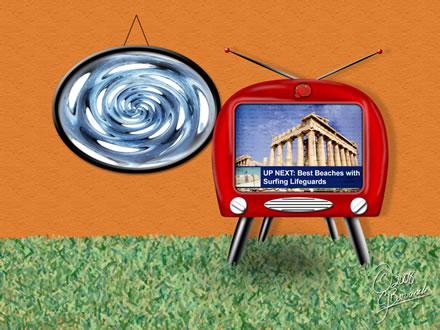 Figuring out how to use Contribute CS3 to update blog

Back in May I watched one of Terry White’s Podcasts on Contribute CS3 which showed how you can use Contribute CS3 to update your blog. So decided to sit down and figure out how that works…

The first attempt was interesting as I had a new blog entry all done up and posted and then noticed that the date was wrong on the entry – started playing around with that and somehow managed to delete the post… GRR… Even more interesting is a few hours later it showed up again…. very odd…

Some interesting little bugs I came across… there is a BlogHub.csi file in the App Data section of the users local settings that has to be edited to allow photos wider than a 150px photo (it has a height/width limiter in the file)… also had to set up a new directory on the server for uploads and adjust permissions so WordPress and Contribute can upload photos…